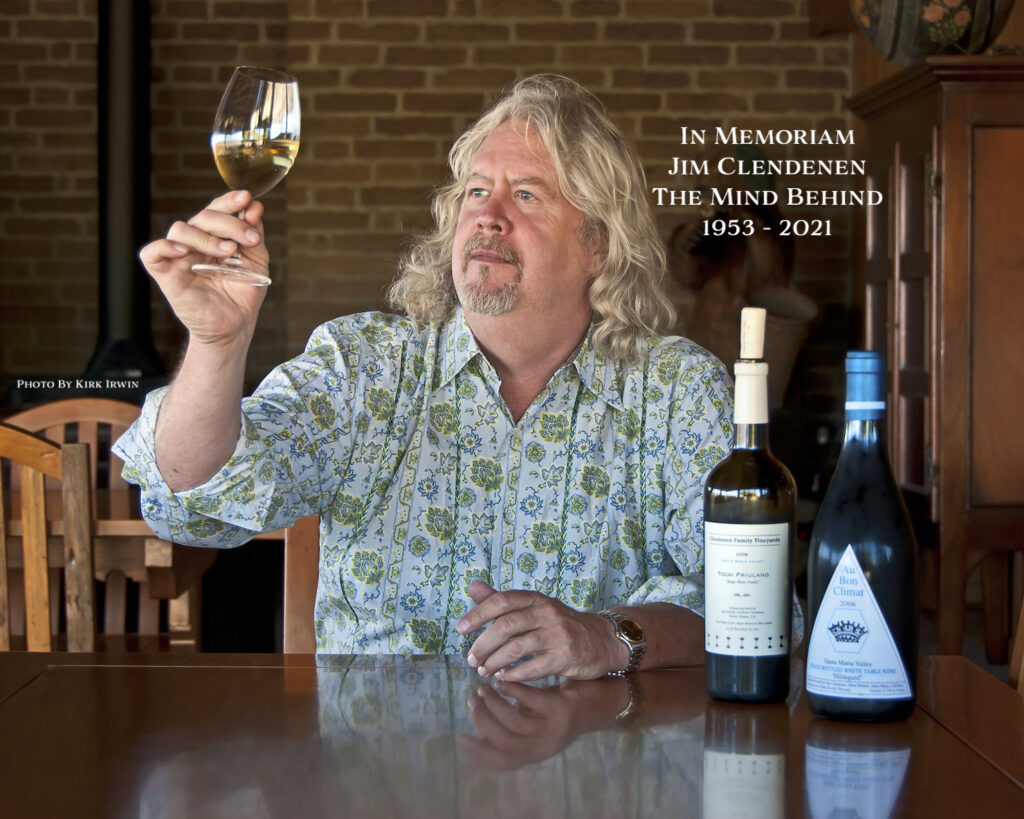 A  Tribute  to  Jim Clendenen,  The  Mind  Behind

One of the founding fathers of our region passed away in his sleep Saturday night. Jim Clendenen was unforgettable, both personally and professionally. His personality radiated far beyond his physical space, and his reputation as a winemaker knew no bounds. His wine label, Au Bon Climat, was renowned throughout the world, as was his dedication to the Santa Barbara County wine region. Jim made elegant and classical wines inspired from his travels to Burgundy, and he refused to waver from that style.

Jim was instrumental in putting Santa Barbara Wine Country on the map and was a tireless champion of the region. He traveled all over the world celebrating Santa Barbara County’s unique ability to grow almost any varietal, and its particular penchant to grow beautiful Chardonnay and Pinot Noir. Jim mentored hundreds of people, not only in the art of winemaking, but, as he felt equally important, in the joy and appreciation of the culture of food and wine.

Jim was a consummate host, full of opinions and wit, and he adored sharing his knowledge and educating his audience, while offering exquisite food and drink. Lunches with Jim – which he often cooked himself among the barrels at the winery he shared with Bob Lindquist on the Bien Nacido – were legendary experiences lined with bottles from around the world. You felt as if you were drinking with royalty, yet, without pretense or snobbery. The conversation was always about wine: the trade, the industry, upcoming chefs, and certainly, whatever wine opinion was top-of-mind for him at the time. And people listened. An invitation to lunch was never refused, and he was a sought-after and respected mentor.

Jim’s heart was as big as his booming voice and his determination to see the region flourish was reflected in his contribution as a founding member of the Santa Barbara County Vintners Association and the Santa Barbara County Vintners Foundation. He attended all the wine auctions the Foundation hosted to benefit their partner, Direct Relief International, and carefully curated elegant and commanding lots of wine for the silent auction. He regularly offered his grand house for charitable events, and even admitted that was the primary purpose for which it was built: to help others. Because he was such a road warrior extolling the virtues of Santa Barbara Wine Country, Jim carried his charitable efforts all over the world, enthusiastically supporting fellow chefs and vintners who each had their cause.

Jim was one-of-a-kind. He will be missed, but his impacts on Santa Barbara County will live forever.

Please read some of the comments by his peers below, send us your own if you have them, and raise a glass to our iconic friend. If you’d like to send your own memories or comments, click HERE.

“Nobody did more to promote Santa Barbara wine than Jim, period. He was my mentor, business partner and friend for life!”

“It is with deep regret that I learned of Jim’s passing.  He has left a huge empty space in our wine family. Always the consummate host and life of the party he was a true trailblazer and rule breaker with a deep passion for balance and tradition in the world of wine. He was the most generous soul supporting a multitude of causes with gifts of wine and his endless energy. A tireless promoter of our special region he traveled the world establishing worldwide recognition for the quality of our products. Thekla and I will miss his charm and great wit. Our condolences to Isabelle and Knox and his Au Bon Climat wine family.  It is a very sad loss for all of us.  I know he is shaking them up in Heaven with some older vintages.  His spirit will remain with us and our region forever.”

“A tragic loss for the family and the wine community. He was my mentor, my friend, my business partner in Vita Nova and the godfather of my son Evan.  I championed his wine because they, and he, were brilliant.”

“I’ve known Jim my whole life. He was always the life of the party, sharing passion and conviction for everything Santa Barbara County has to offer. He always had a smile and a laugh to give. He is an integral part of the wine story of Santa Barbara County, and he will be significantly missed.”

“Truly a sad day….Jim was like a big brother to me…He helped me navigate my life and was the BEST mentor anyone could have asked for.”

“When one thinks of Santa Barbara wine, you cannot help but think of him Clendenen. What he did for us wine producers is the equivalent of Wolfgang puck did for the restaurant world.  Game changer.”

“Like so many others, I was drawn to this industry by the stories behind the bottles, which is to say the people. From my earliest education on the wines of Santa Barbara, Jim loomed large in the narrative. So often in this beautiful industry of ours, there is a single thread that weaves together the histories of numerous people and projects. Jim was one of our threads. Whether you called him a friend, a colleague, a mentor for many decades, or simply considered his name synonymous with Santa Barbara and California wine, we have all been enriched by his unmeasurable contributions to our collective craft, as well as our shared community and family. Jim was and is a giant, and we will all stand on his shoulders for generations to come.”

“Jim carried the rest of Santa Barbara County wines on his shoulders for decades.  He built a global brand with Au Bon Climate and did more than any other individual from our region to promote and introduce the world to Santa Barbara County Wines. He stuck to his beliefs on wines, never wavering whether it was popular or not.”

“What I will forever admire most about Jim is the love and respect that he had for his daughter and son, of whom he was immensely proud.  I have also derived much inspiration from how he (& Bob L.) always treated the Team at Au Bon Climat/Qupe – like family, with true affection and respect, drawing no lines of class, race, creed, culture, or gender.  Some of us were lucky enough to experience that firsthand – what a blessing!”

“When I was just starting out, working as Assistant Winemaker for HdV Wines in Napa, I recall reading an article that featured Jim and he said something that always stuck with me and was clearly evidenced by his life in wine. Paraphrasing: “make the wine you want to drink and work like hell to sell it.”  As an aspiring winemaker it summed up the industry – enjoy what you craft but be realistic about the amount of people who may, or may not, share your tastes. Sage words that he seemed to live and with that guiding principle it is no wonder his wines were consistent beginning to end.”

My wife Jennifer and I are heartbroken to hear of Jim’s passing. I have fond memories of Jim going back to the 90’s, when I first discovered his wines and attended some very special wine dinner events that he attended at a Los Angeles restaruant called Alto Palato (long gone but never forgotten). Later, when I became a wine director, I put several of his wines on the wine list (including his Barbera, now long gone, unfortunately) and championed his wines to as many people as I could.

Like many others I made regular visits to the wine tasting events at the winery, one of the highlights of the year for sure. And was lucky enough to be invited by Jim to join him and the staff for lunch at the winery when schedules allowed.  Jim and I bonded over our love of Italian varietals and I would always bring obscure Italian reds in an attempt to impress him. Sometimes he was impressed, sometimes not, which brings up another thing I loved about Jim; the up-front opinions. He always told you how he felt!

We did not know Jim well, but we feel like we really did know him well. The same way you feel you know an artist through their paitnings or a director through their films. We felt a bond with Jim (and all the staff at ABC) through his wines. The bond is still there and I don’t think it will ever go away. The wines, like our memories of Jim, will continue to shine and improve with age.

Our deepest condolences to his family and friends. We have lost one of California’s greatest winemakers.