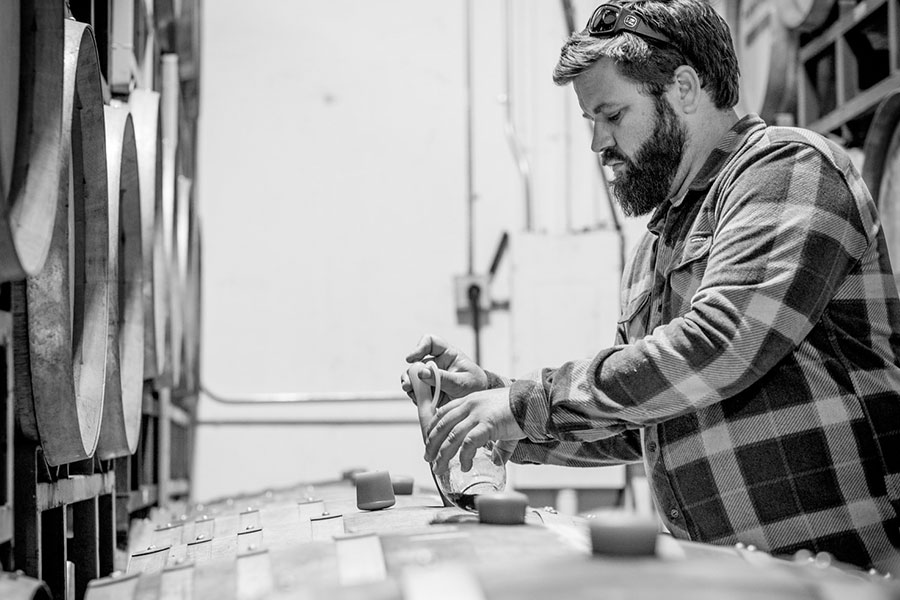 Drake really isn’t a stranger to this site. Do a search and he comes up. I feel more eyes need to be put on his work though. Drake is doing an amazing job. He is very diligent and follows his philosophy to a T. He has grown up around fermenters where Whitcraft Winery was being made by his legendary father, Chris Whitcraft. But Drake has been making all the winemaking decisions since 2007, and doing EVERYTHING since 2008. He’s really hitting his stride. He also has a very exciting project called, “Mes Amis”. You can find a dry riesling and albariño under this label.

Phil: What got you into wine?

Drake: Do you remember the wine that turned the light on (i.e. “epiphany wine”)? I grew up in wine so it got into me really, but I could never see myself doing anything else. Its challenging and rewarding, and I love to drink wine so it works out. My father got me into wine. I consumed myself with it though starting in 2004 really, after working full time since 2001

Phil: What was your first job in wine?

Drake: Stomping fruit when I learned how to walk, first paying job was filling bottles at 10 years old on my Dad’s bottling line

Phil: What was the first vintage you worked and with who?

Phil: Are there some other labels you worked for?

Drake: The Carlei Estate in Australia

Phil: Have you done harvests in other countries?

Phil: Which wine regions have you been to? Which one would you really like to visit?

Drake: All of California, the Yarra, the Mornington Peninsula, Alto Adige, Tuscany, Sardinia, Sicily, Greece. I need to go to Chablis and Burgundy, NEED to.

Phil: What “style”would you say your wines are?

Drake: An Honest style, no adulteration or manipulation of ANY kind. I pick when its ready which to me is not a raisin and I like acidity, and whole cluster.

Phil: What other passions do you have? Hobbies/interests?

Drake:  Playing Guitar and going to the beach and hiking and skiing. Food, beer….

Phil: What motivates you? Gets you through rough days?

Drake: Gratitude, and the desire to help since I have been blessed. If you have a bad day in Southern California, regardless of what you do, you’re an idiot. You live better than 90% of the world, so get over it.

Drake has a tasting room at his winery: 36A S. Calle Cesar Chavez, Santa Barbara, CA 93103. Open Friday through Monday, 12pm to 4pm. Rest of the week, appointment only. His website address is http://www.whitcraftwinery.com